The Frye Company was founded in 1863 by John A. Frye, a shoemaker from England. Frye products have a long and illustrious history. Frye® boots were worn by soldiers for both sides of America’s Civil War, soldiers in the Spanish-America war, and for Teddy Roosevelt and his Rough Riders. Many New England families during the mid and late 1800’s wore Frye boots as they pioneered across the country to the West.

Frye’s current Harness Boots are rooted in tradition and continue to draw influence from the Cavalry. Today the 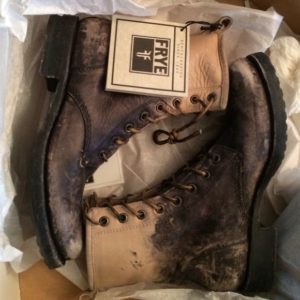 classic Harness Boot holds a place in American culture. The Frye Harness Boot has been pictured in fashion spreads internationally. In 1938, on a trip to Washington, D.C., John A. Frye’s grandson and namesake met a U.S. Navy Admiral who confided that he had trouble finding the Wellington boots he liked so much. As a favor, John agreed to make him a pair. Frye continued to fill requests for these boots through the Second World War. During World War II, Frye supplied thousands of servicemen with Frye Wellington boots, known as Jet Boots, by mail order.

In the 1960’s, Frye reintroduced the Campus Boot, from its 1860 original, featuring a bulky toe and chunky heel that came to epitomize the attitude and the style of the 60’s and 70’s. There was nothing like these “new” Frye Boots on the market, and consumers began to demand “Original Fryes.” When searching for items to represent the America of the 60’s, the Smithsonian Institute chose a pair of Frye Boots.

The quality of all Frye shoes is timeless. For almost 150 years, Frye leather products have continued to be benchcrafted from the finest full grain leather uppers. It takes over 190 steps to make one pair of Frye boots. Frye remains dedicated to the commitment of craftsmanship for which Frye bootsand Frye shoes have been known for more than 100 years.