One of the most special things about the holiday season is the music and the movies. There’s no other time of the year where I can sit with my family and watch basically the same thing night after night and absolutely love every moment of it. Also I should note that when I say movie, I am also including TV specials. Basically if it has a Christmas theme, it is in the running to find itself on this list. I am breaking down into two categories, “Nostalgic” and “Comedy”.

Honorable Mentions—It’s A Wonderful Life, Miracle on 34th Street, The Year Without A Santa Claus


FEATURED BRAND of the Month 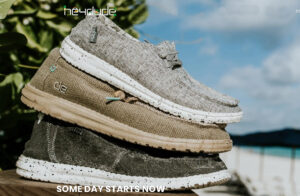 Born in Italy, raised in the world. They make affordable, lightweight & comfortable shoes that allow you to move freely while exploring the world. Hey Dude emerged in 2008 out of an intense desire to see lightweight, comfortable, stylish and yet affordable well made shoes become the standard, and not the exception for how you treat your feet.