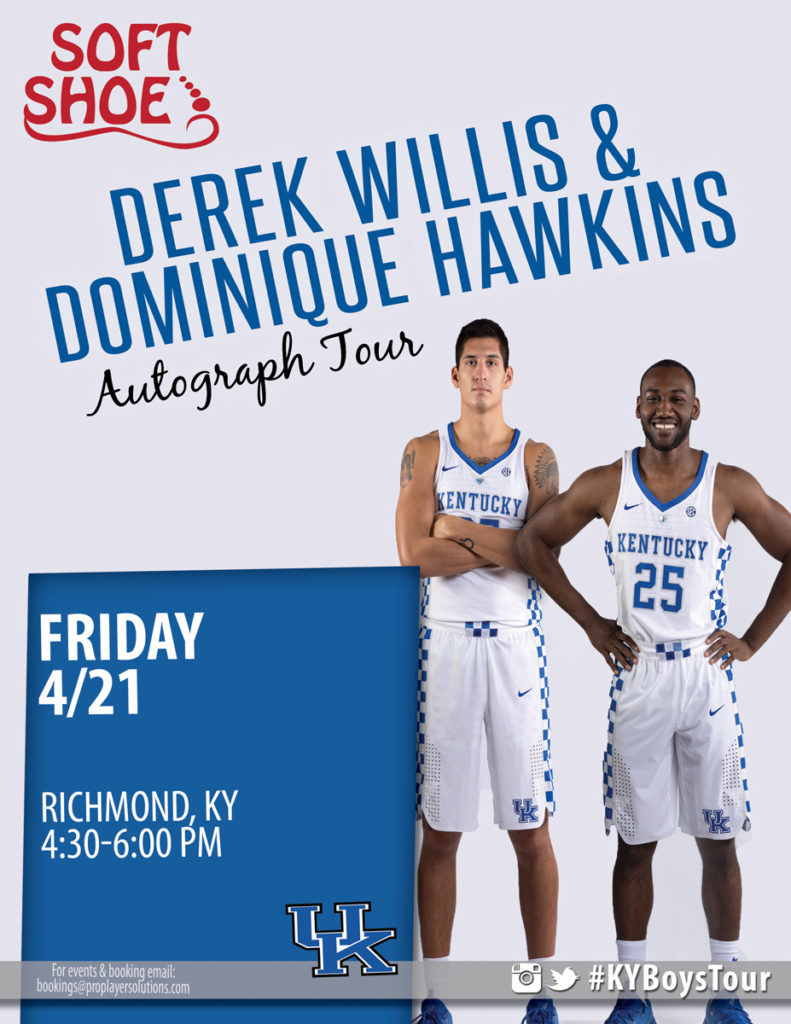 Kentucky’s homegrown seniors Dominique Hawkins and Derek Willis have been on an autograph tour since April 2nd showing appreciation to all their KY fans. Hawkins and Willis ended their Kentucky careers with a flourish.

Former Kentucky basketball players Dominique Hawkins and Derek Willis will take time on April 21st to meet their fans in Richmond KY who have cheered them on for four years at UK.

“It feels good to be out here in public interacting with everyone,” said Willis. “They’ve been the most loyal fans without a doubt.”

“This tour means a lot to both of us I’m pretty sure,” said Hawkins. “These people have rooted for us for four years, traveled across the country for us. They’ve always been there for us. That’s the thing about it. They stick with us no matter what.”

Soft Shoe is proud to host Willis and Hawkins for their only Richmond KY stop on their autograph tour. Come out to meet the players, take pictures and get their autograph. Don’t miss an opportunity to get your Soft Shoe UK apparel signed by them.  There will be special deals and promotions for those who attend. Don’t miss it! 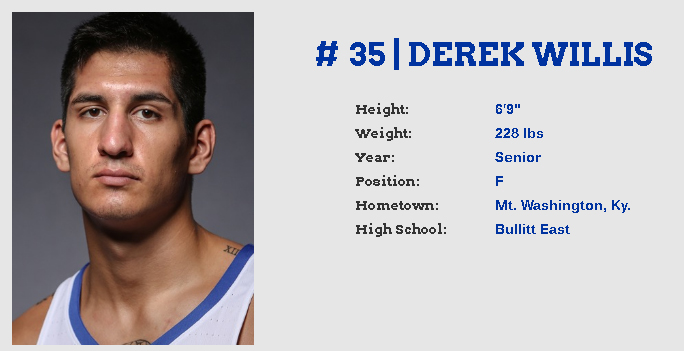 After starting just six total games in his career, Derek Willis started the final nine games of his career, averaging 7.8 points and 7.3 rebounds in the NCAA Tournament. Son of Trudy and Del Willis, born June 21, 1995, in Louisville, Kentucky, and raised in Mt. Washington, Kentucky. Willis chose Kentucky over Indiana, Louisville and Purdue and lists his parents as the most influential in his life.  He wanted to be a police officer growing up and he chose No. 35 because Kevin Durant is his favorite player.  His pregame superstition is making sure to listen to music.

Derek averaged 18.0 points and 9.3 rebounds while leading his Bullitt East High School team to the Sweet 16 in Rupp Arena as a junior, won two 6th Regional titles, and is the first player to commit to the 2013-14 class. ESPNU Recruiting rated him at No. 37 at his position and he appeared in the Derby Classic and the Kentucky-Indiana All-Stars games along with teammate Dominique Hawkins.

Dominique Hawkins, meanwhile, scored in double-figures in just two of his first 116 games as a Wildcat, but reached double-digits in three of his final five, with all of them coming in postseason play. Son of Denise Hawkins and Doug Farris, Hawkins was born June 27, 1994, in Louisville, Kentucky but raised right here in Richmond KY.  He chose No. 25 because that is also the number he wore in high school and he names his mother as his greatest influence in life.  His most memorable moment as a basketball player was being a part of the 2011 Final Four run when Aaron Harrison hit the late-minute 3-pointers.

Dominique averaged 20.4 points and 5.3 rebounds per game as a senior and was named the 2013 Kentucky Mr. Basketball and is the 17th player in UK history to claim the honor.  He also hauled in state Gatorade Player of the Year honors, directed Madison Central to the state championship and captured most valuable player honors after averaging 20.4 points, 5.6 rebounds, 2.9 assists and 1.8 steals per game throughout the Kentucky Boys’ Sweet Sixteen.  Dominique was rated as the No. 44 point guard by 247 Sports and the Rivals and Scout ranked him as a three-star player.

Hawkins and Willis finished their Kentucky careers with a 126-27 record, two Final Fours and an Elite 8, with a 13-4 mark in the NCAA Tournament.

One Response so far.

Free Shipping or Curbside Pickup on all orders

We are excited to announce our NEW Online Store! The same selection, the same quality brand, the same affordable prices and the same customer service but now online to keep our staff & customer safe. Shop Small at Soft Shoe Online.